Hey guys, I'm posting these pictures to help users in drawing image for Profiles on character pages. I know it seems weird since I generally don't draw anything, but if someone wants/needs help, hopefully these will.

I am an art fan, so pictures like these that I find on the web I want to admire, especially concept art. So here I will be posting pictures I have found of concept art, that you can use to help you sketch/draw a robot of your own.

While I'm trying to help, mine is not the be-all on how to draw a robot and I sugest finding professional books etc.

Note: If anyone asks me to take down these pictures, as they claim ownership, I will. Also don't post these pictures as your characters.

Firstly, the basic rules of creating a giant robot, mainly a transformer

An example of hands
Add a photo to this gallery

There are other ways to use this, other designs, but having a starting skeleton helps.

This image is from RyugaSSJ3 an artist on Deviantart, be sure to check his stuff out.

Add a photo to this gallery
Masami Obari is known for having some of the best Super Robot art and designs. In fact he probably created many of the tropes of the series, such as the Obari Sword Swing, something you've probably seen several times in other shows that don't circle around robots. I hope this tutorial helps with those who want to create more realistic/awesome designs.

Possibly the hardest part of drawing Robots, super or otherwise, are the optics, the eyes. Here's a image from Devianart Artist Suzylin

Add a photo to this gallery

Concept art I've found all over the internet. None of this is mine, and no, don't try to pass it off as your own. Besides it's concept art, unfinished.

Some concept art from Mekton Zero 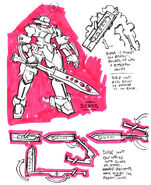 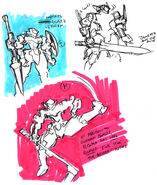 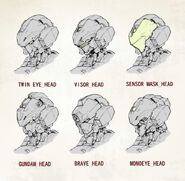 Add a photo to this gallery

Retrieved from "https://super-robot-fanon.fandom.com/wiki/User_blog:SolZen321/Art_to_help_with_Drawing?oldid=12559"
Community content is available under CC-BY-SA unless otherwise noted.